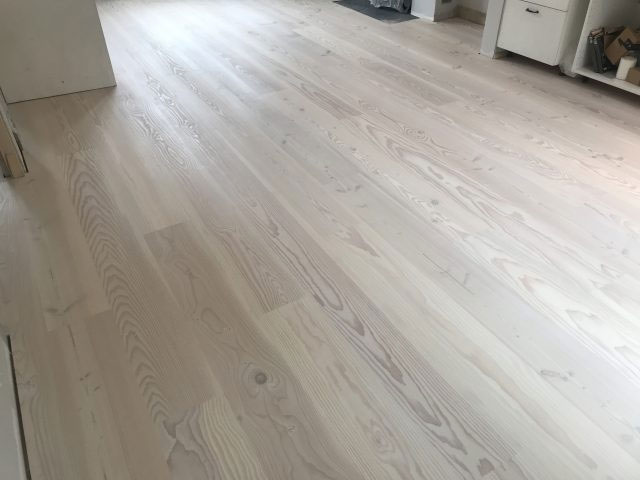 As part of our floor sanding services we were asked to assist the client to achieve the “Dinesen look”. The client installed the Dinesen Douglas Fir flooring themselves but were hesitant to carry out the sanding procedure. Using our Lagler Hummel sander we removed any unevenness, builders dust and gave the floor a uniform, clean look. Once all remaining surface dust was removed we applied the Dinesen Lye as per Dinesen’s instructions. The following day the floor was lightly sanded with a green contractor pad before again thoroughly vacuuming the floor. As per Dinesen’s recommendations two coats of Dinesen White Soap were applied at a 2:1 and 3:1 ratio respectively. On completion the floor was lightly buffed to solidify the soap. The floor was then handed back to the client who were over the moon with the works and the overall finish.

“Conrad did an amazing job with our Dinesen floors. After our floor was fitted Conrad came and sanded the floor down and applied Lye and first layers of white soap. Having worked with Dinesen floors many times before he knew exactly how to do the job the way Dinesen recommends it. He also took plenty of time out to offer us some great advice of how to maintain the floors the best possible way going forward. We would highly Conrad ! Thanks Again.”